A time ago I was looking for fatwood, but i couldn’t find any. The only thing that I could find was really dry and porous wood. When I came home I decided to make my own fatwood. Fatwood is just wood and fat (resin 🙂 ) so it shouldn’t be so difficult to make it myself.

I took a small saucepan and filled it with paraffin which I saved from all the candles my wife burned the last two years. Once melted I dropped the pieces of wood in the paraffin. 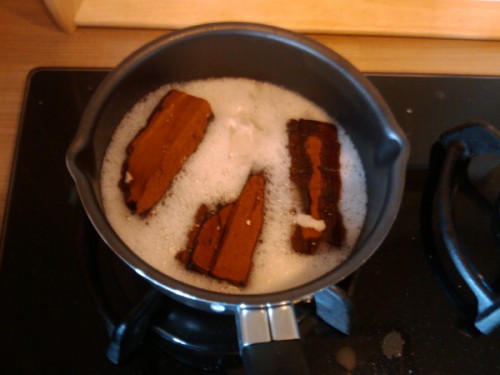 The bubbles you see on the picture is not the paraffin that’s boiling, but the air that’s coming out the dried wood and being replaced by paraffin.

Once all the bubbles were gone I let the pieces of wood cool down, so the paraffin could harden out. A few hours later I tried the first piece of self made fatwood.

The first two times I tried to light the fatwood (and all other attempts after this video) were successful as of the first or second strike. Only in this video (which is uncut) it took me 21 strokes to get the fatwood burning. It just needs that one little hot sparkle…